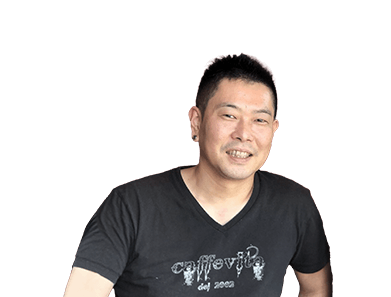 Yuji Kadowaki, the owner of CAFFÉ VITA in Matsue-shi, Shimane-ken, Japan, was wellborn in a family distinguished with exceptional coffee roasting. Both Yuji Kadowaki’s father and brother, Yoshimi Kadowaki and Hiroyuki Kadowaki, have their own roasted coffee shops in the same city.

Yuji Kadowaki was born in Yasugi-shi, Shimane-ken in 1977. Feeling perplexed about life after being graduated from high school, he left for Osaka to acquire baking skills in a confectionery shop. In 2001, he spent two weeks in Italy learning the basics of Espresso. Afterwards, back in Japan, he practiced and gained training at SARUBIA KŌHĪ and CAFÉ ROSSO. In October 2002, he went to Italy again. In November 2002, he started CAFFÈ VITA in Matsue-shi, Shimane-ken, and he won the third place in Japan Barista Championship (JBC) when participating for the first time. Afterwards, he continued winning prizes in JBC and also achieved good results in Japan Latte Art Championship (JLAC).

In 2008, Yuji won the championship at the barista competition held by UCC Coffee Masters Espresso Department in Chugoku and Shikoku region. In 2010, he visited Seattle, the coffee capital of the U.S. As a “coffee junkie” there, he started to research and develop gadgets for making Espresso and sell his original blends of roasted coffee beans.

In 2011, Yuji was invited by La Marzocco and joined in their team of coffee machine development and the Street Team, which is a team of top baristas. In 2012, he held the post of the chief judge in JLAC. Meanwhile, he was also the exclusive barista for Lucky Coffee Machine, not only demonstrating the making of coffee at fairs but giving lectures as an instructor for the company. In addition, he is also the writer and editor of the column, Ouchi Cafe (Home Cafe) on the official website of Recruit.

Yuji said, “If you need special equipment to make such coffee, then leave it to a specialty shop. At home, all you need to do is grasp the essentials and make tasty coffee with ease.” To Yuji Kadowaki, capability is what it takes to run a coffee shop rather than half-baked products for consumers.